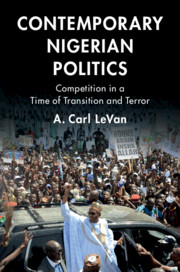 Contemporary Nigerian Politics
Competition in a Time of Transition and Terror