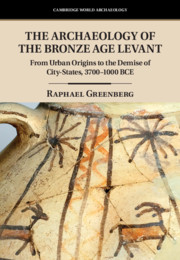 The Archaeology of the Bronze Age Levant
From Urban Origins to the Demise of City-States, 3700–1000 BCE