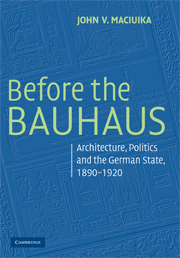 Before the Bauhaus
Architecture, Politics, and the German State, 1890–1920