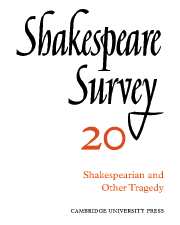 Volume 20. Shakespearean and Other Tragedy