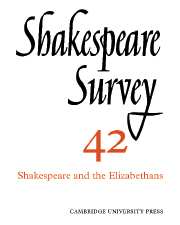 Volume 42. Shakespeare and the Elizabethans