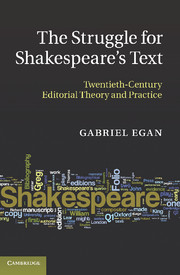 The Struggle for Shakespeare's Text
Twentieth-Century Editorial Theory and Practice