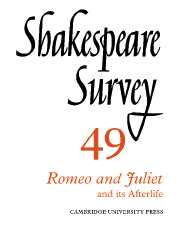 Volume 49. Romeo and Juliet and its Afterlife