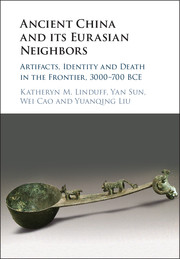 Ancient China and its Eurasian Neighbors
Artifacts, Identity and Death in the Frontier, 3000–700 BCE