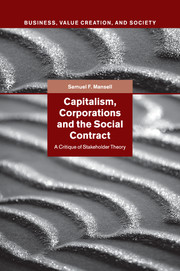 Capitalism, Corporations and the Social Contract
A Critique of Stakeholder Theory