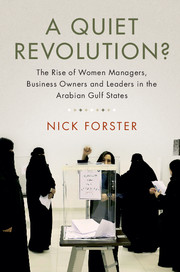 A Quiet Revolution?
The Rise of Women Managers, Business Owners and Leaders in the Arabian Gulf States