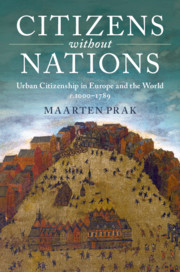 Citizens without Nations
Urban Citizenship in Europe and the World, c.1000–1789