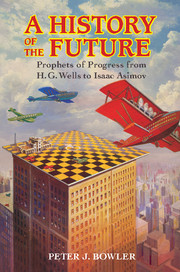 A History of the Future
Prophets of Progress from H. G. Wells to Isaac Asimov