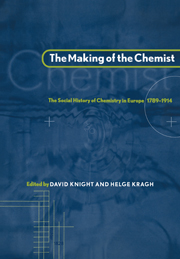 The Making of the Chemist
The Social History of Chemistry in Europe, 1789–1914