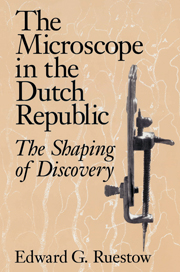 The Microscope in the Dutch Republic
The Shaping of Discovery