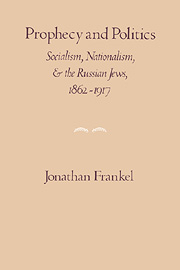 Prophecy and Politics
Socialism, Nationalism, and the Russian Jews, 1862-1917