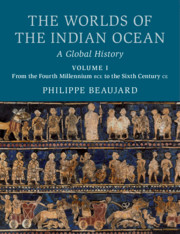 Volume 1. From the Fourth Millennium BCE to the Sixth Century CE