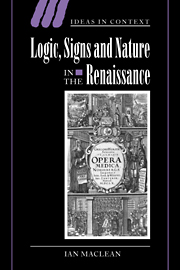 Logic, Signs and Nature in the Renaissance
The Case of Learned Medicine