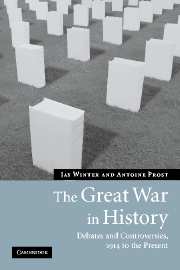 The Great War in History
Debates and Controversies, 1914 to the Present