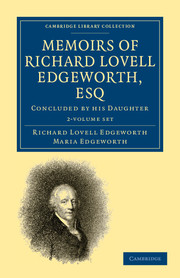 Memoirs of Richard Lovell Edgeworth, Esq
Begun by Himself and Concluded by his Daughter, Maria Edgeworth
2 Volume Paperback Set