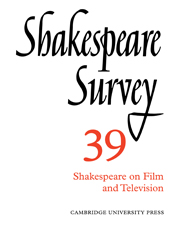 Volume 39. Shakespeare on Film and Television