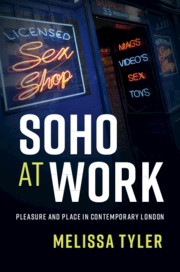 Soho at Work
Pleasure and Place in Contemporary London