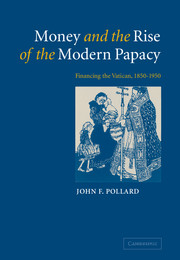 Money and the Rise of the Modern Papacy
Financing the Vatican, 1850–1950