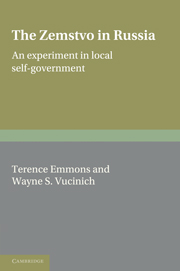 The Zemstvo in Russia
An Experiment in Local Self-Government