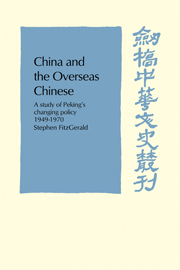 China and the Overseas Chinese
A Study of Peking's Changing Policy: 1949-1970