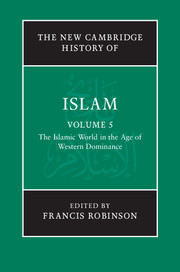 Volume 5. The Islamic World in the Age of Western Dominance