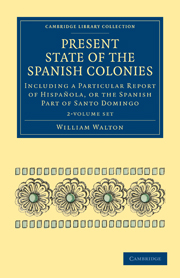 Present State of the Spanish Colonies
Including a Particular Report of Hispañola, or the Spanish Part of Santo Domingo
2 Volume Set