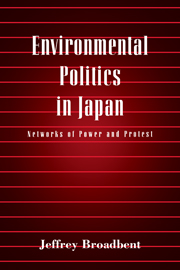 Environmental Politics in Japan
Networks of Power and Protest