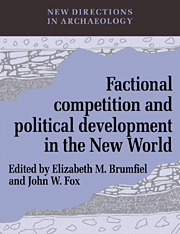 Factional Competition and Political Development in the New World