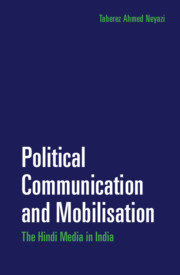 Political Communication and Mobilisation
The Hindi Media in India