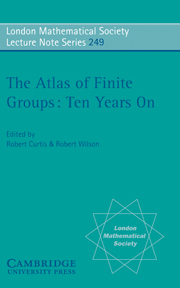 The Atlas of Finite Groups - Ten Years On