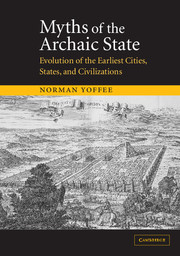 Myths of the Archaic State
Evolution of the Earliest Cities, States, and Civilizations