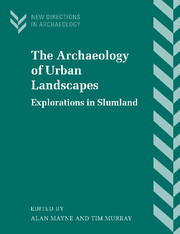 The Archaeology of Urban Landscapes
Explorations in Slumland