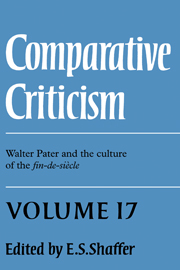 Volume 17. Walter Pater and the Culture of the Fin-de-Siècle