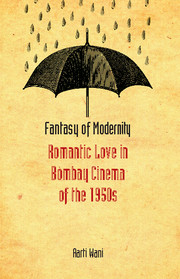 Fantasy of Modernity
Romantic Love in Bombay Cinema of the 1950s