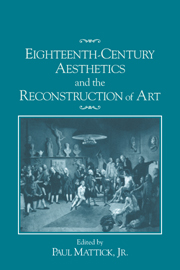 Eighteenth-Century Aesthetics and the Reconstruction of Art