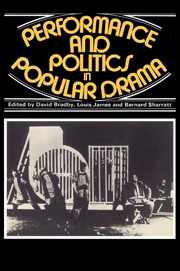 Performance and Politics in Popular Drama
Aspects of Popular Entertainment in Theatre, Film and Television, 1800–1976