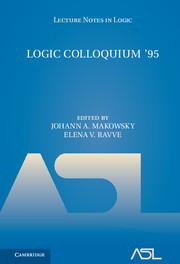 Logic Colloquium '95
Proceedings of the Annual European Summer Meeting of the Association of Symbolic Logic, held in Haifa, Israel, August 9–18, 1995