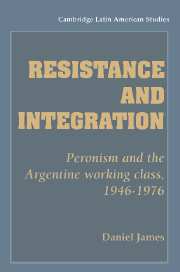 Resistance and Integration
Peronism and the Argentine Working Class, 1946–1976