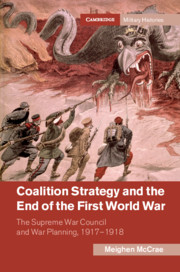 Coalition Strategy and the End of the First World War
The Supreme War Council and War Planning, 1917–1918