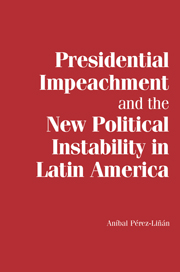 Presidential Impeachment and the New Political Instability in Latin America