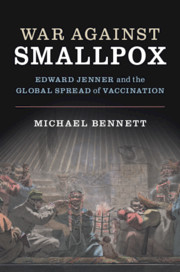 War Against Smallpox
Edward Jenner and the Global Spread of Vaccination