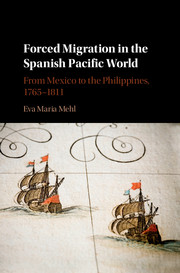 Forced Migration in the Spanish Pacific World
From Mexico to the Philippines, 1765–1811