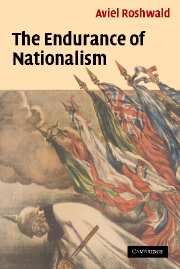 The Endurance of Nationalism
Ancient Roots and Modern Dilemmas