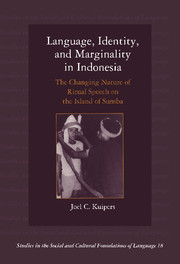 Language, Identity, and Marginality in Indonesia
The Changing Nature of Ritual Speech on the Island of Sumba