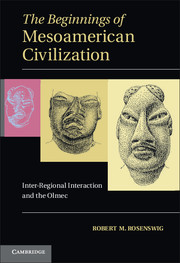 The Beginnings of Mesoamerican Civilization
Inter-Regional Interaction and the Olmec