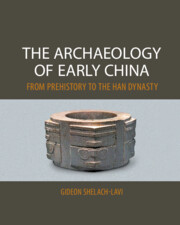 The Archaeology of Early China
From Prehistory to the Han Dynasty