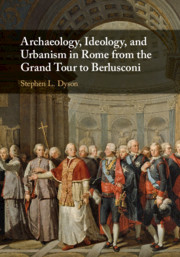 Archaeology, Ideology, and Urbanism in Rome from the Grand Tour to Berlusconi