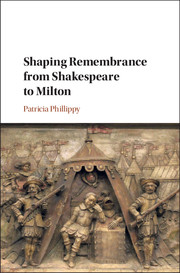 Shaping Remembrance from Shakespeare to Milton