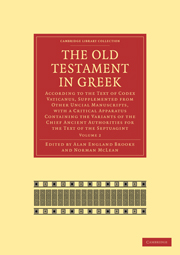 The Old Testament in Greek
According to the Text of Codex Vaticanus, Supplemented from Other Uncial Manuscripts, with a Critical Apparatus Containing the Variants of the Chief Ancient Authorities for the Text of the Septuagint