Marianne Talbot talks about Bioethics: What it is and why it is important 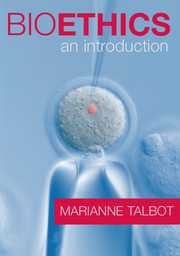 By Marianne Talbot, author of Bioethics: An Introduction
(CUP 2012)

Ethics is the study of right and wrong, of which actions we should and shouldn’t perform. Not all the things we do are morally evaluable of course. If I trip over a carpet something has happened to me I haven’t done anything. The behaviours we choose, our actions, are the only behaviours of ours that are morally evaluable: in choosing them the choices we make are moral choices.

In 1997, for example, Dolly the Sheep was born after the technique of Somatic Cell Nuclear Transfer (SCNT) was used to clone her from an adult sheep. Dolly was the first cloned mammal. Immediately the possibility of our cloning human beings loomed large. Almost every country in the world speedily introduced legislation to ban the cloning of human beings for reproductive purposes. This ban seems morally mandatory, at least until the technology improves (there were 277 failed attempts to clone a mammal before Dolly was born).

Is it really morally permissible, though, to use SCNT to produce human embryos for use in research, human embryos that will be destroyed at 14 days? To what extent does the very early human embryo have the right to life?

It is interesting to speculate about what will happen when technology permits safe human cloning. Will we then be able to clone humans for use in research but not to provide babies for childless couples? Would this be a morally reasonable situation in which to find ourselves?

The new technique of synthetic biology, on the other hand, enables us to re-design existing forms of life, and even to create forms of life unknown in nature. In 2010 Craig Venter used it to create Synthia, the world’s first man-made organism[1]. But is it morally permissible to do this? Some say that we shouldn’t even try to ‘play God’ in this way. But such techniques hold out the promise of our being able to create organisms capable of detecting and removing pollution: imagine if we had been able to produce such organisms during the Deepwater Horizon disaster off the Mexican coast? Doesn’t this suggest that it is morally permissible to use such techniques?

Perhaps it is acceptable for scientists to use such techniques but only under very strict regulation? That such regulation is needed is suggested by the fact that these same techniques were used, in 2005, to recreate the virus that caused the ‘Spanish flu’, which in 1918-19 killed nearly 100 million people. Venter described this as ‘the first true Jurassic Park Scenario’. But what if terrorists were to learn how to use such techniques? What if ‘lone wolf operators’ such as the Unabomber were to use it to blackmail his Government?

The scientists who recreated the flu virus published their findings, together with their methodology, in a scientific journal[2]. This, of course, is what scientists do: it enables other scientists to replicate their work. But isn’t this just asking for others to replicate this same work, but for evil rather than good?

All these questions are questions of Bioethics. We can ignore them if we like. It is not practically necessary to do bioethics to do biotechnology. Ideally though scientists would work with the public and the authorities to help everyone understand, and think sensibly about, the morality of the actions made possible by biotechnology. If we fail, as a society, to engage with issues of bioethics we may one day sadly regret it.

For more information and to buy the book, click here.